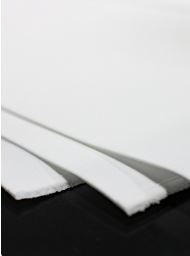 Teflon and PTFE are two different names of same polymer material. To put in other words, Teflon is the trade name for PTFE. The Poly tetra fluoro ethylene (PTFE) is a unique polymer with some particular properties which are hardly or never found in any other organic polymer. That’s what distinguishes it from Teflon.

Do you know what those important properties are?

You might have got the gesture here, what the curtain opener is telling about! Yes, we are going to throw light on the minor differences between PTFE and Teflon today. Superficially, they both are same, but there is a slight chain of differences between both creating a thin line distinguishing both polymers in terms of their applications, features, and other specifications.

Let’s take a detailed insight into both.

The Poly tetra fluoro ethylene is a fluorocarbon solid since it possesses high-molecular-weight compound consisting of carbons and fluorine only. It can also say to be a thermoplastic polymer consisting of just two elements: fluorine and carbon.

It is a hydrophobic polymer with least amount of coefficients of friction against any solid known to anyone. This unique feature lends itself well to those applications which demand low levels of resistance.

Teflon is a trademark of a company spin offed from DuPont called Ken Arse.  We can also call it a chain of carbon atoms that are saturated with fluorine or used two carbons being saturated with hydrogen.

Difference between PTFE & Teflon in terms of Features, Uses, & Applications

PTFE is hydrophobic – The primary feature of PTFE is, it never reacts with water being a hydrophobic polymer material.

It is also non reactant with alcohol, and other highly polar oxygen and hydroxyl-containing compounds. This property is an outcome of the high electronegativity of polymer structure.

High Chemical properties – Another highlighting property of PTFE polymer is, it comprise of high chemical and corrosive resistant properties. For this reason, it has been used as pipeline coating and containers in which reactive and corrosive chemicals are required.

PTFE is Non- Receptive – Since PTFE is highly non-receptive. Hence, it is used for coating surface of numerous cookwares, generally known as a non-stick skillet.

Bonding Structure – The holding structure of PTFE keeps the transmission of electrons through the atomic orbital of the PTFE polymer.

The holding structure of PTFE is extremely steady. Teflon isn’t exceptionally responsive to compound operators in light of the strength of the fluorine to carbon bonds.

Since PTFE is a non-reactive material, perhaps due to its high strength of carbon-fluorine bonds, so it is often the choice of material utilized as a part of compartments and pipework for destructive and responsive chemicals.

PTFE is also used in multiple computer applications including; coaxial cables, hookup wires, and to name a few due to its exceptional dielectric properties. Additionally, it is also utilized as a lubricant to increase wear resistance as well to reduce the friction.

PTFE is utilized as a non-stick covering for skillet, cookware and even modern sustenance handling apparatus.

Teflon is rich in this feature – low coefficient of friction – which makes this polymer best for nonstick food cooking.

Good Dielectric Properties – PTFE does not discharge electrons from the polymer orbital effortlessly because of the quality bonding between of the carbon and fluorine. This influences Teflon to have great dielectric properties and makes it a perfect protector.

It is Reusable – Teflon is reusable and can keep going for quite a long time and years. These adaptable sheets can likewise be utilized to secure the base warmth platen amid sublimation or whenever there might seep around your picture.

The Teflon sheets can also be utilized as a weight to keep a transferring paper at its place between the warming procedures to guarantee to culminate comes about.

For this reason, Teflon rod suppliers put all their efforts to make this product, a multi-functional one to make it versatile for variety of industrial, as well as medical applications.

There is not such a vast difference between both Teflon and PTFE. Though one is more dominant over other due to some highlighting features which brings it into the limelight, otherwise Teflon is just a brand name of the same polymer.